At Scottish Ruby Conference earlier this week, among the many great talks I attended was Jess Eldredge’s excellent introduction to sketchnoting.

I liked the idea of doing sketchnotes since I came across the first ones I saw, by Amanda Wright, but had never properly tried it. I do makes notes in a fairly visual way – here, for example, are my notes from Kerri Miller’s excellent talk on concurrency. 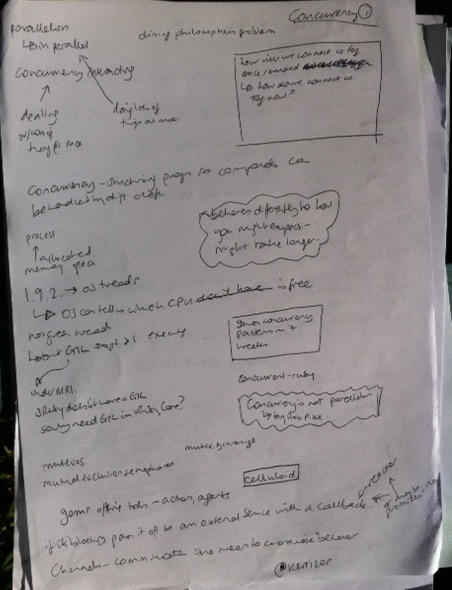 The main thing of course is that my handwriting is atrocious.

I was right at the front in Jess’s talk and felt self-conscious, so the notes I made were actually worse than my usual standard. 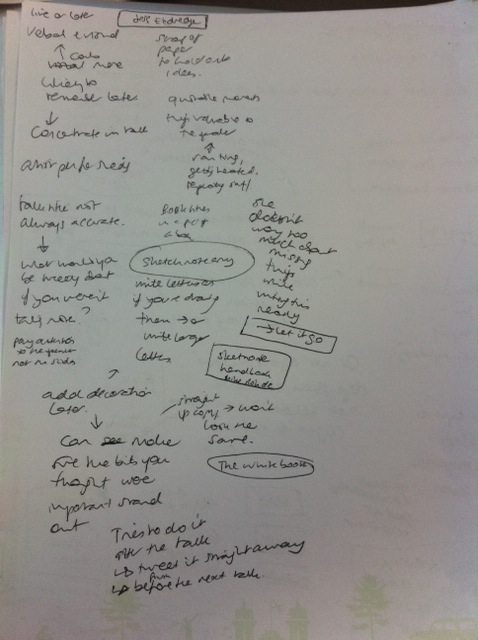 However, I was inspired, and also happened to have a nice pen with me, so tried to do a sketchnote in my last talk of the day, André Arko’s very interesting Development was the easy part. 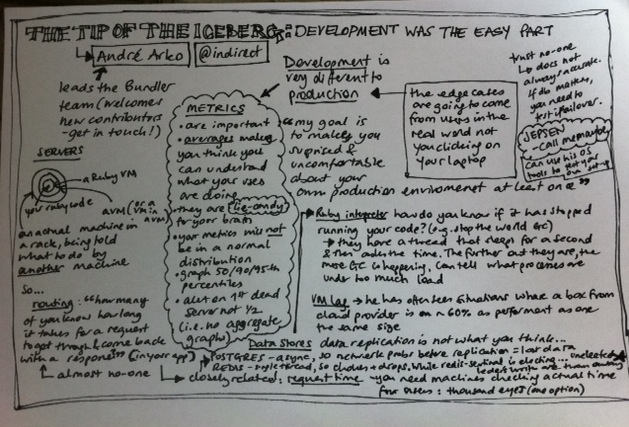 Not amazing. But better than my usual notes.

Jess’s advice was very practical and could be immediately applied. For example, the title is the bit that looks really good, and that’s because I got there early as she suggested and wrote it before the beginning of the talk.

Her main advice for bad handwriting was to slow down – and I did, and it really helped, in that I can actually read this, unlike my usual scrawl.

I did find it made me concentrate a bit more as everything André said I was trying to figure out what the key point would be to that section so I could write that down.

However, I clearly ran out of space. Data stores in the bottom right (above request time) was the last section he covered. The bit I missed out was that redis-sentinel runs an election and while it’s running, all candidates accept writes, but then when one is elected, all the unelected ones throw away their writes.

It’s a shame that this is the one thing I was unable to write clearly, as that was the only thing he said that was completely new to me. That made me realise that I was worrying too much about how the notes would look to other people and whether they’d be able to follow them, so writing things down that I already knew. Whereas one point Jess made several times was these are my notes, and don’t need to make sense to anyone else.

Also, a lot of things I note down in talks are actually items for my To Do list, either unrelated if my attention is wandering or, if I’m engaged, how I can apply these things in my projects. I probably don’t want to capture all of that for posterity.

So what did I learn?

It’s worth taking a nice pen and some plain paper to a conference, because at least I can make notes that will be easier for me to read when I’m looking back at them. I might even buy an artist’s pen, as I really like the shading Jess did.

If I slow down, my handwriting is almost legible!

It’s fun. I always fancied doing the bits of comic-book drawing that didn’t require artistic talent, like cross-hatching – this is my chance!

I decided to write up the notes from Jess’s talk again: 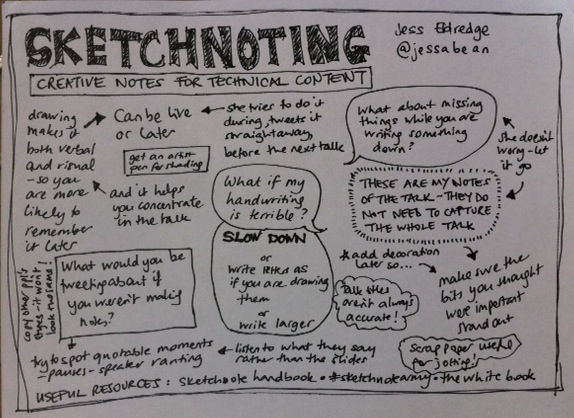