I’ve been working on a prototype of what a Platform as a Service (PaaS) for government might look like, as we wrote about in a previous post. One of the first things we did was look at the open source PaaS options that were available. This post is about how we did that and what we learned. 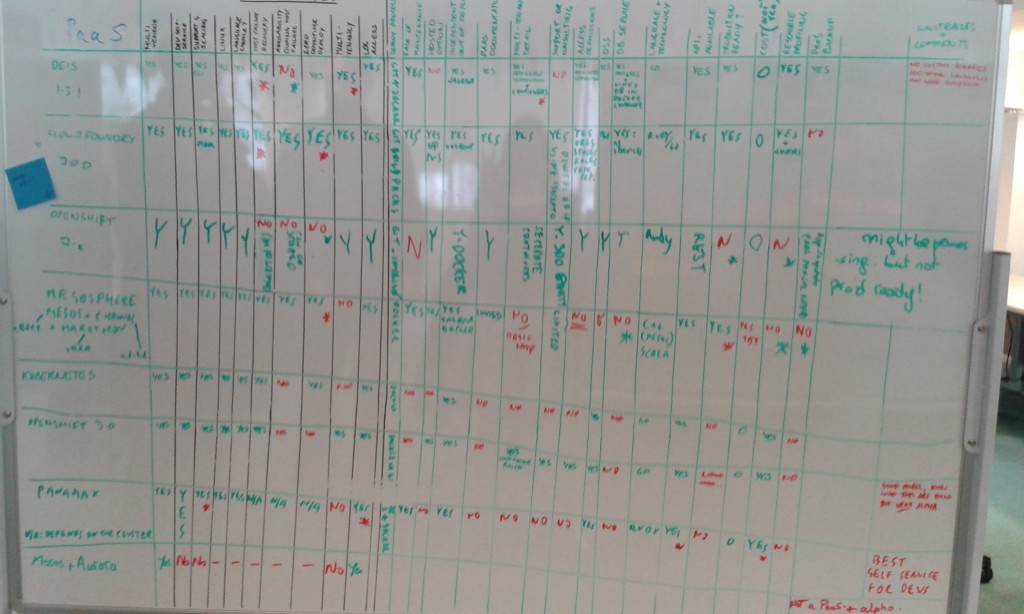 The open source options we considered

PaaS is a very fast-moving field at the moment and there are a lot of options. The first thing we did was take some time individually within the team to identify which options were worth investigating. We based that on previous experience, things we’d read about, and further research online. We were around eight people on the team, so we had a lot to draw on.

It’s not always the case that you are comparing like-for-like with PaaS technologies. For example, Cloud Foundry is a fully-featured PaaS, whereas Mesos is a cluster-management system. While Mesos on its own has a number of PaaS features, it didn’t meet a combination of the criteria "developer self-service" and "multi-tenancy" (e.g. no authentication, access control).

I wanted to investigate Mesos as it’s an interesting technology, so we looked at ways to combine it with other technologies who offer those features. We chose combinations of technologies based on what we found to be common combinations. In this example, you can see we looked at both Mesos + Aurora, and Mesos + Marathon + Chronos (Mesosphere).

At this stage, we ruled out things that we didn’t think were worth investigating further (for example, they were nowhere near production-ready) and worked out some combinations that made sense to look more into.

The longlist of technologies we investigated is:

In our previous post I outlined the four main criteria we’d identified from our user research: a PaaS would have to be multi-tenant, self-service, allow application developer support and be able to run on multiple public clouds. This had already allowed us to rule out some technologies (for example, a number of PaaS technologies only run on AWS). We also had some further must-have criteria. The complete list of our selection criteria is below:

Brett Ansley, our business analyst, wrote these up very clearly and with acceptance criteria to clarify what we were looking for. For example, for zero downtime deploys:

Comparing against our selection criteria

We then split into pairs and each pair took a technology in turn to evaluate it. Dan Carley, our tech lead, outlined some consistent steps to take in each investigation so that we could be sure each pair was investigating in the same way. For example, to investigate high availability:

Each pair spun up the technology they were using and investigated it. As they found the answer to each of the selection criteria, they marked it on the whiteboard (main photograph) so we (and any passers-by) could clearly see how we were progressing and which technologies had what. If any technology failed a must-have, the investigation would stop; otherwise it was time-boxed to two days.

One thing that I found particularly interesting was that multi-tenancy is not a feature of many of these technologies. For example, Kubernetes and Mesos, two widely used and interesting technologies, do not support multi-tenancy. There’s no way to ensure that a team of developers can administer only their application and not the applications of another team. This meant that they were not suitable for our purposes.

The tech that meets our needs

After going through this process of looking at and comparing a number of open source PaaS solutions, the clear front-runners were Deis, Tsuru, and Cloud Foundry. The next stage was to investigate these three technologies more and choose one to build a prototype. This has helped us with user research, which we'll share more on later. In the meantime, we hope sharing what we’ve learnt about these technologies is useful to you, and do let us know your thoughts in the comments below.

This post originally appeared on the GDS Technology Blog.