Others may know you better than you know yourself

Various studies over the years have found that your colleagues are actually better at identifying some of your strengths than you are yourself. Here’s an interesting article in the Guardian from 13 years ago and a more recent article in the Atlantic.

The Guardian article suggests you try an exercise called a Johari window, and when I was leaving GDS seemed like a good time to try it out.

To do this, you ask some co-workers to choose 5 or 6 adjectives that they think best describe you, from a list of 56. You do the exercise yourself separately, and then you compare your answers with theirs.

Adjectives you select and they also select are strengths that you have self-awareness of. Things they select and you don’t, are traits that are obvious to others and not to you. Adjectives you select and they don’t are things that aren’t as obvious to others as they are to you – maybe because you hide them (e.g. you might try and hide anxiety) or perhaps because you don’t know yourself as well as you think.

I set the exercise up using a Google form

I listed the adjectives in the order they are presented in the Guardian article (rather than Wikipedia which has them in alphabetical order). There is one adjective on Wikipedia (empathy) that is not in the Guardian so I added that. The form was anonymous, so I wouldn’t know who had said what.

I then emailed 11 people I’d worked with closely over the past few years and asked them to fill it in, with a link to the Guardian article for more explanation. 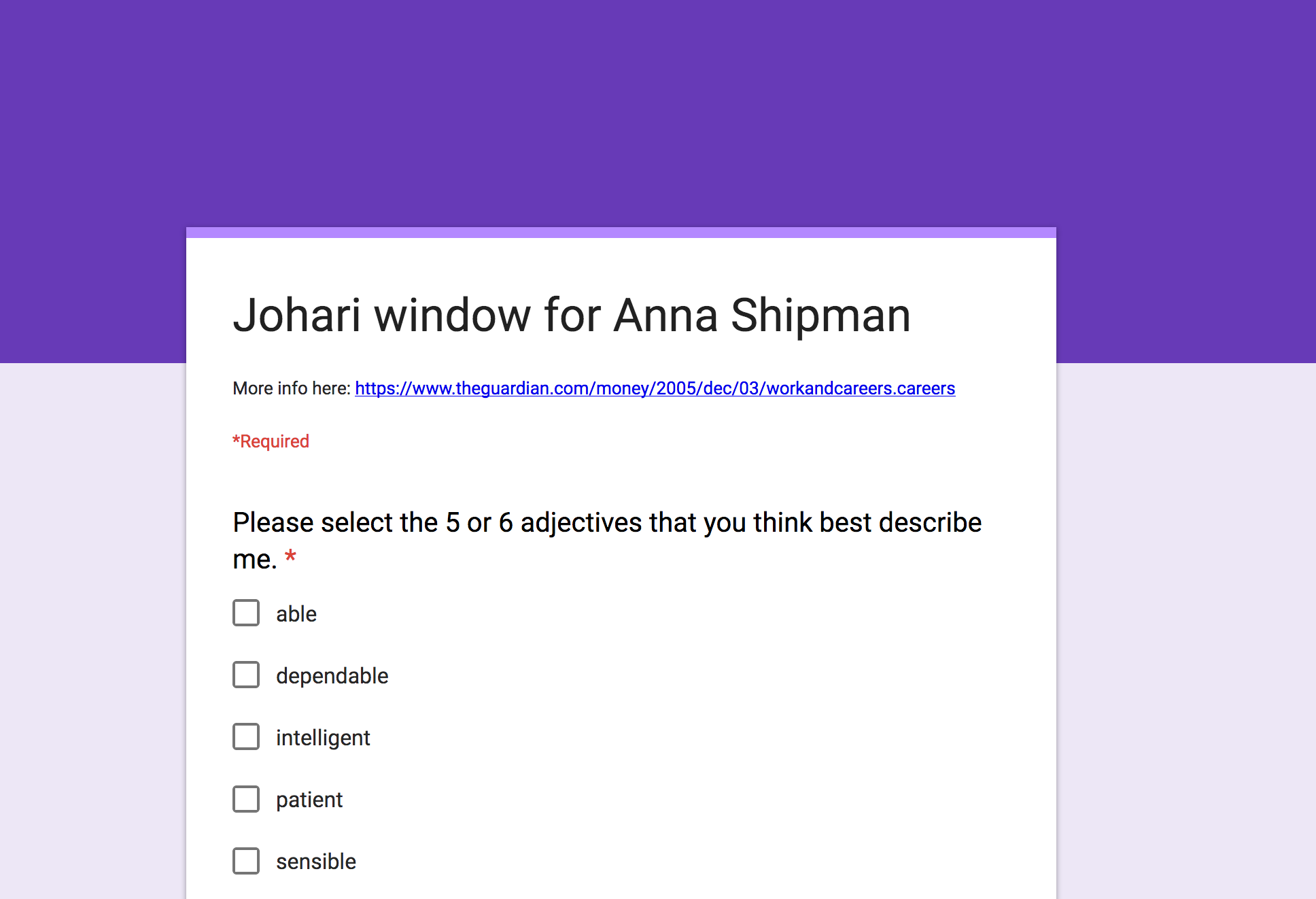 For my own results, I went through the list deleting until I had the set. It was pretty hard to get it from around 12 to 6 and I had to do a lot of hard thinking (“Am I more this than that?”).

I also found that some of my strengths didn’t seem to be represented. For example, one of my strong points is that I get things done: I’d characterise this as determination or single-mindedness. What adjective in the list would represent that?

I put the results into a Johari window

Of the 11 people I asked, 10 filled it in. Here is a photo of the results. The number in brackets refers to the number of other people (not including me) who selected it.

If you can’t read my handwriting or see the picture, I’ve listed the full results at the end. 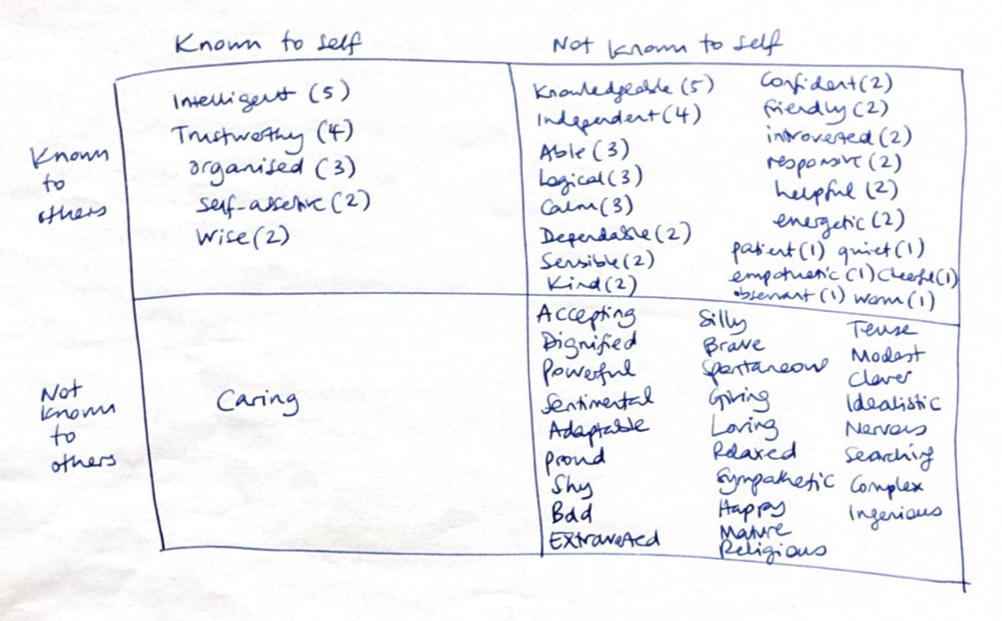 The results were positive and interesting

This seems to me to be a good result; of the 6 strengths that I identified, 5 of them were agreed with by others, showing that I have a good amount of self-awareness. Additionally, the ones that I value most highly in myself (intelligence, trustworthiness) were selected by a high number of the others, which is pleasing. The one that I selected and no-one else did was “caring” which I dithered over whether I meant “caring” or “kind” – and 2 people selected “kind”.

There were some interesting results. Three people picked “calm”, which isn’t something I’d use to describe myself (it didn’t make the top 12). But does it really matter? In a work context, if people think I am calm then that’s a good thing, whether or not I consider myself to be calm on the inside.

I’m not sure of the value of the fourth quadrant, “Not known to self or others” - it might just not be known because it isn’t true. This is referred to as the untapped area, but some of them you wouldn’t necessarily want to tap, like “silly”, or “tense”. And some of them contradict others, e.g. “introvert”/”extravert”, so you’d hope for at least one of those in the fourth quadrant. I think this is where the model doesn’t quite work, but I haven’t read the original paper.

The Google form was not very user-friendly. If I was doing it again, I think I would print out pieces of paper and ask people to circle the relevant ones, as that might be a much easier way for them to parse all the information and pick one. It is a lot to ask of people, so anything that could make it easier would be helpful.

I’d also be tempted to remove some of the options, both to make it easier for the participants, and also because some of them are odd. For example “loving” is not something I would expect colleagues to comment on. “Religious” is odd as well, is that relevant to your personality? Could we remove some of the near duplicates, like “intelligent”/”clever”?

Another possibility was suggested to me by my excellent art therapist and trainer friend, Dr Sarah Haywood: you could just ask people to supply their own adjectives and then put them into a word cloud or similar. That might also have the advantage of drawing out some more negative words, which is also really useful to know.

I’m glad I finally did it

I first saw the article in the newspaper when it came out, over a decade ago, and at the time I did not feel confident enough to ask colleagues to do that for me. That change in itself is interesting – I may be more self-aware than I was then, but I’m also much more comfortable with asking people to do things like this for me.

In all, it was an interesting and worthwhile exercise, and it was nice to see that my self-assessment is reasonably close to what others think of me. If you do try it for yourself, do let me know how you found it!

The number in brackets refers to the number of other people (not me) who selected it.

Known to self and others

Known to others and not known to self

Known to self and not others

Not chosen by anyone