Right now, hosting services is one of the most time-consuming barriers for new digital services, and usually involves duplicating work done elsewhere. On the Government Platform as a Service team we’re working on solving that.

Every digital service that government runs needs to have a place to run from; it needs to be hosted somewhere so that it is accessible to users via the internet. The service doesn’t ‘just work’; there is a lot of effort involved in setting up all the components required to host a service.

These components don’t vary much between services. Every service needs an automated way to let developers know when something is wrong, or to alert them to something. So, in practice, these groups of components end up looking very similar across very different services. The picture below shows you an example: 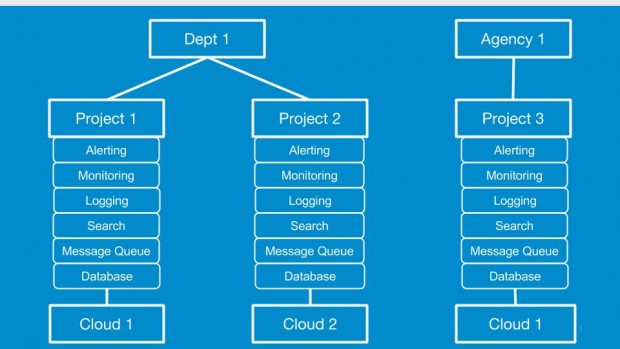 As you can tell, there’s a lot of duplication. Teams all over government can end up duplicating work that’s already been done elsewhere. That means spending time on areas that aren’t their speciality, such as application monitoring or log aggregation, which stops teams from focusing on their areas of expertise.

It also leads to a lot of time searching for people with expertise in this area to hire. All of this takes time and money and leaves teams less time to focus on their users’ needs.

One way to address these issues is to provide a platform as a service (PaaS) that services could use for their cloud hosting. A shared PaaS would then change the diagram above into something more like the one below: 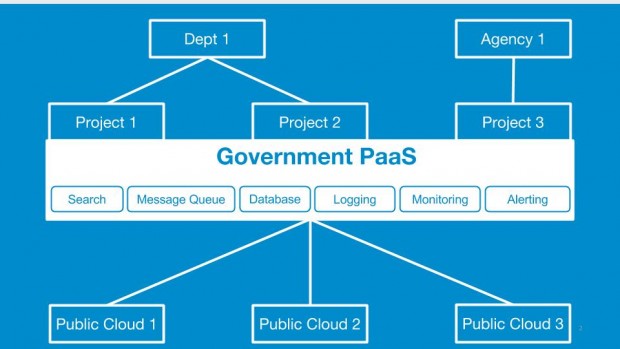 A Government PaaS wouldn’t just solve the issue of duplication, and where to focus your teams. One thing that takes a lot of time in government is procuring commercial services and making sure they are accredited. If we could do that once, for the PaaS, then that could save service teams a great deal of time, while making sure that those aspects are being handled in the correct way.

What a Government PaaS needs

From the user research we’ve been doing it’s clear that it’s important that our platform has a concept of multi-tenancy - applications that run on the platform should be isolated from each other and not be able to read or change each others’ code, data or logs. It wouldn’t be appropriate, for example, if the Digital Marketplace application was able to access the data of the GOV.UK publishing platform.

We’ve also learned from our experience supporting GOV.UK that a platform where the people developing applications also support the application out of hours leads to better software and a better user experience. We want a platform that supports this model right from the beginning.

Apart from multi-tenancy and the support model, there are some other things that we feel are important in a shared PaaS.

It needs to run on multiple public clouds. This approach ensures that we avoid being locked into a single provider, so we encourage price competition, while also removing the risk of a single point of failure. Changing infrastructure providers is very difficult to do if you’ve built to a single provider’s specification so this needs to be built in from the beginning.

What we've been doing

We’ve spent a couple of months exploring what a Government PaaS might look like and how it could help teams running digital services across government. We’ve spoken to many potential users, and we’ve worked closely with our colleagues in other departments who are working to address similar problems, and we’ve found that no existing departmental solution meets all the needs we’ve identified.

We’ve evaluated several open source and commercial options, and we’ve built a prototype and shown it to potential users – developers, web operations engineers and services managers – both within GDS and in other departments. We’ve tested our prototype by seeing how it works with real applications (for example, we tested it using Digital Marketplace and GOV.UK’s Government Frontend).

We’ll write about all of this more in later blog posts.

What we're doing next

We expect to be in alpha until the end of November, by which time we will have completed a detailed comparison of two open source PaaS technologies and addressed issues around performance, security, and scalability, for example. We are really interested in talking to more potential users, so if you are interested in getting involved in our user research, or seeing a demo of what we’ve done so far, please get in touch.

This post originally appeared on the GDS Blog and was co-written with Carl Massa.